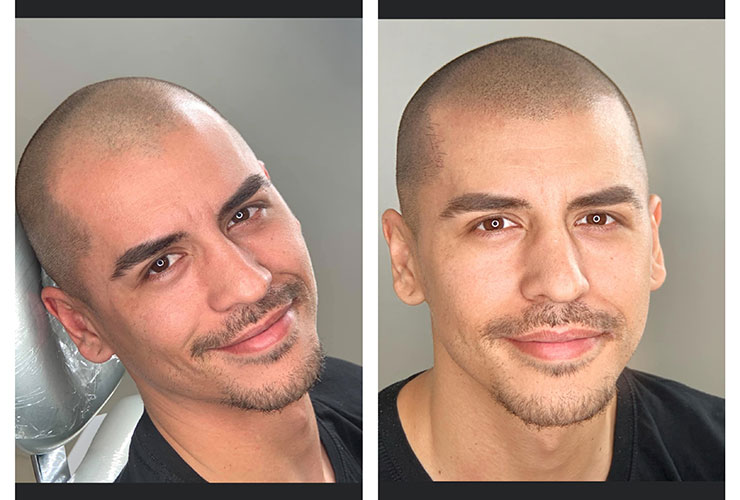 "People say there's nothing wrong with being bald, but I think it affects confidence a lot. Male pattern baldness has been in my family for generations, so I knew what was coming for me. But once I started to lose my hair, it was really difficult to cope with it. I found myself losing confidence and staying at home more often. I didn't want to go out or see anyone either. A friend saw me spiral and recommended getting micropigmentation done. After doing some research, I came across an Inkredible Scalp Mircropigmentation in New York, and I'm so grateful! After three sessions, I had the illusion of lightly trimmed hair and was no longer looking bald! It was exactly what I wanted, and it's made me feel so much better. I'm really thankful to everyone at Inkredible scalp for their hard work!"

"When I entered my 30s, I started to lose my hair pretty quickly, so I decided to get a hair transplant. The transplant wasn’t very successful, and it left a pretty nasty scar on my head. When people asked about the scar, I got a really funny look once I said it was for a hair transplant (it’s obvious why – I still barely had hair). So, I got annoyed and decided to cover up the scar and add some illusion of hair. After just three sessions at Inkredible scalp my scar was all gone! I really couldn't believe it. The procedure was also pretty much painless, just some mild discomfort. The staff was also very accommodating; they ran me through the whole procedure and made sure I was as comfortable as possible."

"I suffer from androgenic alopecia, which is essentially female pattern hair loss. It's not like I'm bald, I just have very thin hair, and most of my scalp is visible at the top of my head. For me, it's really embarrassing if I'm honest. I didn’t feel good about myself and found it difficult to do daily tasks such as going to work. After just one session at Inkredible scalp, I felt so much better! Scalp micropigmentation with long hair covered up my scalp and made it look like I have a good head of hair. The session wasn’t excruciatingly long either, just like two hours. There was some slight redness, but it went away after 2 days. I didn’t even have to take one day off work. I was able to go back to my everyday life the next day after my treatment."

"Who doesn't want voluminous hair? Honestly, a full head of hair makes such a difference when it comes to appearance. But for some of us (like me), this isn't really an option. Suffering from male pattern baldness is a curse, but Inkredible scalp has made it so much easier. After reading scalp micropigmentation reviews, I decided to go there. It just took three sessions with them to give me the appearance of having a lot of hair. Before my sessions, a lot of my scalp was visible, and where I had hair was really inconsistent. Now it looks like I have hair all over, and I love it!" Thank you, Inkredible scalp!

© INKredible Scalp 2019. All rights reserved.
How It WorksFAQAbout UsContact