Do I Need to Shave Before Scalp Micropigmentation? 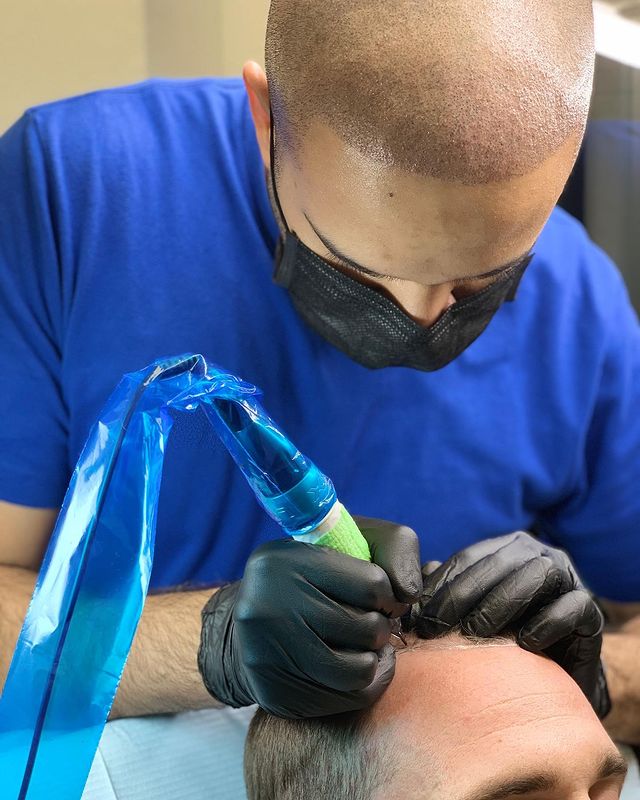 The Beginnings of Scalp Micropigmentation

The genesis story of Scalp Micropigmentation belongs to Great Britain, and although it is hard to believe, SMP has been already practiced for 18 years! The treatments, initially performed in the UK, have gained global reach and brought relief to many people struggling with baldness and hair loss problems.

Hair loss is a common and multifaceted issue among both men and women. It is triggered by various health-related conditions, including hormonal imbalance, stress, genetic predispositions, or a byproduct of underlying diseases. Regardless of the cause, alopecia, and other types of hair loss can generate a cascade of related problems, such as low self-esteem, lack of confidence, discomfort, and even depression.

So, how did it all begin?

The origins of skin pigmentation:

Although tattoo and Scalp Micropigmentation are two different aesthetic procedures, we need to revisit the fundamentals of skin pigmentation to fully understand SMP dynamics.

The word tattoo comes from the Tahitian word tatu and means "to mark something." The origins of the tattoo go back to ancient Egypt, the time of powerful and thriving pharaohs and the pyramids. Wall paintings from 2000 BC show the use of the tattoo technique, and the discovery of Egyptian mummies proves bearing traces of tattoos.

The tattoo had a practical use for marking spies, while Romans utilized the practice to identify slaves and criminals. The tattoo was also of significant importance in the rituals and traditions of indigenous people. In Borneo, the region of Indonesia, women wore forearm tattoos signifying their individual abilities. The tattoo around the wrists or fingers was supposed to ward off disease. The ink also symbolized belonging to a clan or a particular community. In Saxony, for instance, natives implemented skin pigmenting as a means of representation, often tattooing the family coat of arms. The tattoo disappeared from Western culture to be rediscovered in 1691 when the sailor and explorer, William Dampher, brought Prince Giolo, a heavily tattooed Polynesian, to London. In 1769, Captain James Cook brought another Polynesian, Omaia. Sailors on Cook's expedition learned the techniques of tattooing from local tribes. At the time, the word "tattoo" made its way into the European languages for good.

Tattoos are now more of a fashion statement than a mere mark or body adornment. The tattoo has become an artistic form of expression and a way to get attention. And so does Scalp Micropigmentation...

The Founder of Scalp Micropigmentation

Ranbir Rai-Watson is a pioneer in the field of Scalp Micropigmentation. The British lingerist was the first person in the world to conduct a documented attempt to micro-pigment the scalp as a camouflage masking baldness.

From Tragedy to Triumph

Ranbir's husband died suddenly in 2002, and the event was a huge blow and emotional effort on the immediate family. Ranbir's brother-in-law, Ian Watson, began to lose hair as a result of the enormous stress caused by his brother's death. As the disease progressed, Ranbir started looking for ways to help Ian. Anyone who has experienced hair loss knows that the options for dealing with this problem, while numerous, offer only a small chance of success.

After learning about various methods to solve Ian's problem, she decided that the techniques offered on the market were too invasive and ineffective. With that in mind, she decided to look for a different solution.

After extensive training in micropigmentation in Melbourne, Australia, Ranbir combined the techniques of permanent makeup with medical tattoo procedures and developed a specialized set of devices with which it would be possible to introduce the pigment into the scalp and obtain realistic results. The dots on the head were to imitate a hair follicle, and the end result of the treatment resembled a short-cut hairstyle.

In 2002, the world's first Scalp Micropigmentation was performed by Ranbir on Ian Watson. It was necessary to repeat the sessions several times for optimal effect, but the outcome exceeded their own expectations.

Both Ranbir and Ian agreed that they had made a real breakthrough in the fight against baldness. They just created a phenomenal approach to helping many people struggling with hair loss by producing a natural-looking imitation of hair follicles.

To confirm this belief and to be sure that the desired effect of Scalp Micropigmentation could be consistently reproducible in men of all ages and ethnic groups, they began the experimental period. The inventors offered a free SMP to balding men. During this time, they also perfected their technique. Ian himself trained to perform the procedure on others.

Soon after this innovative method was introduced to the world, SMP gained significant media attention, and more people were queuing up to undergo Scalp Micropigmentation. It turned out to be a real revolution and an effective solution for those suffering from hair loss.

After three years of improving the method, the world's first Scalp Micropigmentation clinic was officially established in Birmingham, England. At the time, the procedure was called Micro Hair Tattoo, or simply a hair tattoo.

By 2014, SMP has gained immense popularity and recognition all over the world. At the moment, Ranbir and Ian run a chain of clinics in 19 locations worldwide: four in the UK, seven in the US, five in Europe, and the remaining in Canada, China, and Dubai.

As the word spread, Scalp Micropigmentation progressively becomes more accessible to people in the United States. Trained professionals offer their services in all major cities all over the country, and the minimally-invasive method is a promising, safer, and affordable alternative to more intrusive hair loss solutions.

© INKredible Scalp 2019. All rights reserved.
How It WorksFAQAbout UsContact